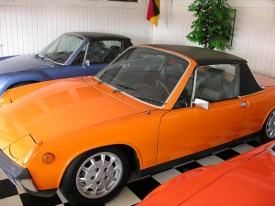 With over eight thousand 911 Sportomatic cars built, it is significantly less rare. Internally very similar to the 911 sportomatic, the 914/6 version had the distinction of being the only 914 with two pedals. The Sportomatic is often considered the first “automanual” transmission in the same vein as the current PDK (Porsche Doppelkupplung) transmissions, only instead of paddle shifters mounted on the steering column, the Sportomatic had a more traditional shifter in the center of the car with only P for park, R for reverse, L for low, and D, D3, and D4 for drive. Also, the Sportomatic uses a Torque Converter type transfer of power, as opposed to the dual clutch type in the modern PDK.

One of the original five sits quietly in the Automobile Atlanta showroom in Marietta, GA. They acquired the car in 1996, and began an extensive restoration of the car. The engine had been rebuilt once already, the car had been repainted, yet the transmission still soldiered on. A full mechanical, and esthetic restoration was done, and the car is now completely pristine.

If you want to see it in person head over to their showroom in Atlanta.