Founded by Texas tycoon Jim Hall, Chaparral Cars has revolutionized endurance racing in its 20 years of activity on the tracks.

Born in 1935, Hall gave up geology to study mechanical engineering. Soon he began driving for Ferrari and Maserati, followed by a brief period in which he competed in Formula 1, and in 1961 he began working on his first personal racing car. Unlike the elite in the racing scene of the 60’s, Hall has designed and built his own test track in Midland TX, Rattlesnake Raceway.

The two men involved in the project, Jim Hall and Hap Sharp, who were not just talented pilots, but also skilled engineers, decided to take aerodynamics to the extreme, in opposition to the much more conservative routes taken by established constructors of the era like McLaren, Brabham or Surtees.

Moreover, Chaparral Cars had the most advanced test track in the 60’s, featuring, among others, photo-electric cells measurement equipment. Even Ferrari, who enjoyed success at the time, did not have that kind of facilities in those days.

Succes came along with the 2, 2C, 2D, 2E, and 2F models, but the racing scene would be amazed with the unveiling of the 2J, the most unusual Chaparral to see the light of day. In addition to a big-block 700 horse power Chevrolet engine, displaced well in excess of seven litres, the 2J had two fans driven by a single 45 horse power unit. As the Can-Am Series had no engine size limit, the additional unit wasn’t affected by an engine displacement maximum. 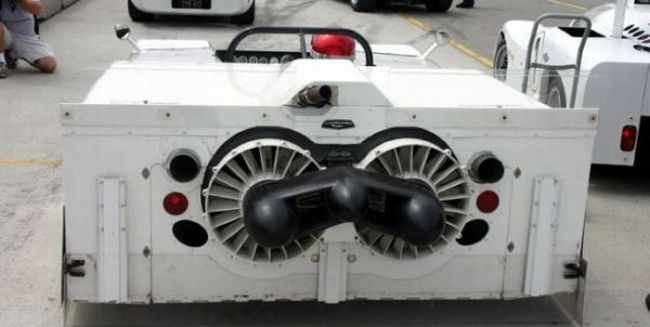 Using the fans, all the air was sucked from underneath the car creating a low pressure area, giving the 2J gripping power and great maneuverability at both high and low speeds. With the help of lexan-plastic skirts, the air was well kept from leaking in, a similar technology being introduced in Formula 1 several years later.

The Chaparral 2J competed in the Can-Am series in 1970. The “sucker car” won a few poles by at least two seconds in qualifying sessions, but never got to win any events because of the frequent mechanical problems, the fan engine letting the car down with several ocassions.

It ran for only one racing season before it was outlawed by the SCCA. While the 2J had not won a race yet, the other teams realized that once it was made reliable, most probably for the 1971 season, there was nothing stopping the “vacuum cleaner”. Instead of trying to develop their own ground effects system, the teams started to complain. The Sports Car Club of America was forced by other teams, McLaren in particular, who argued that the fans were actually movable aerodynamic devices which were banned by the FIA, the same governing body that applied the rule against the 2E’s adjustable rear wing. Ironically, with four consecutive championships won by 1970, McLaren argued that if the 2J was not banned, it would likely kill the Can-Am series by totally dominating it.

While it failed to record wins when it hit the track, the Chaparral 2J is one of the most bizarre, controversial, and ahead of its time race cars ever built!