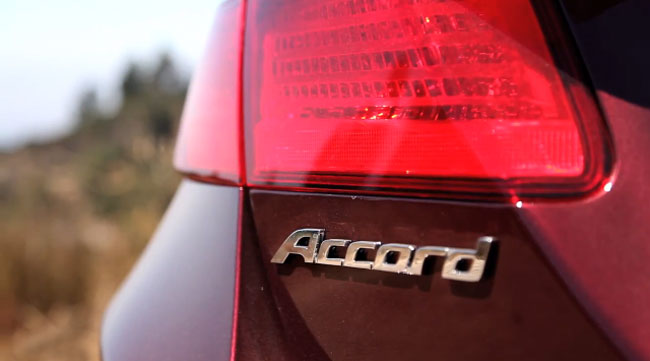 Starting back in 1976 and in every generation since, the Honda Accord has raised the bar in the Family Sedan class. Once one of the easy choices in the mid-size sedan segment, there are now a slew of competitors out there. And that’s why we feel that an in-depth, unbiased review of the 2013 Honda Accord is crucial to those in the market. Has Honda made mid-size sedan shoppers’ lives easier by raising the bar once again? Let’s find out! 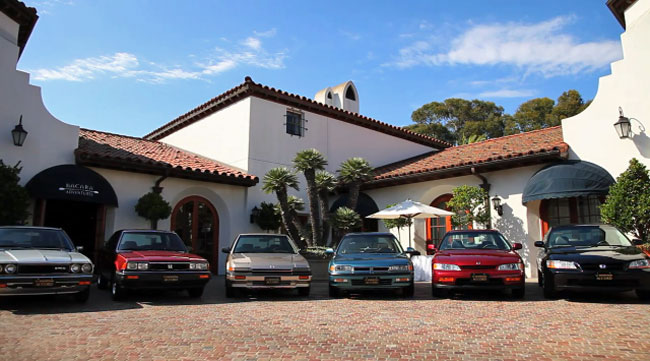 More than just a new look, the Accord is the first Honda model to get the EarthDreams powertrain, starting with a new 4 cylinder engine. 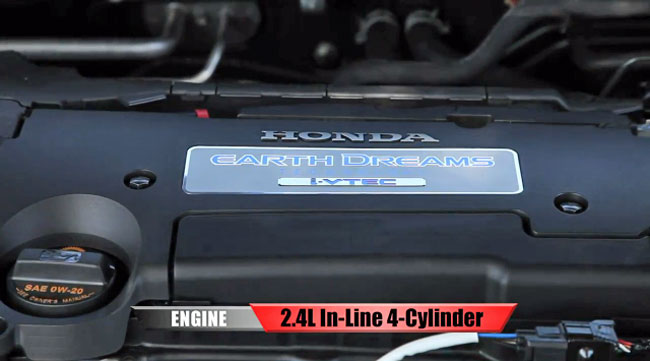 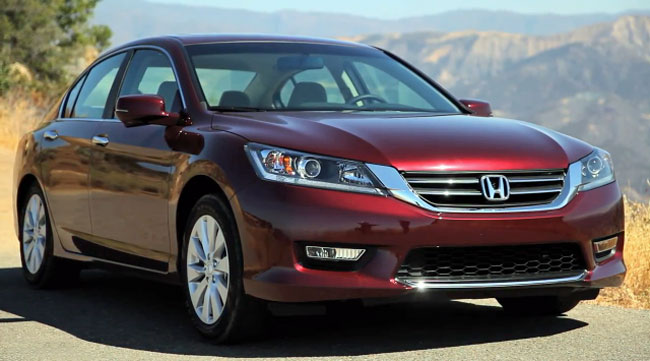 The design of the all-new 2013 Honda Accord is certainly evolutionary (not revolutionary) and even Honda designers have admitted that it’s no work of art. And yet there are definitely some nice design cues on this vehicle. Perhaps the best word to describe it is serious. That’s because of the up-front look with squared-off edges. 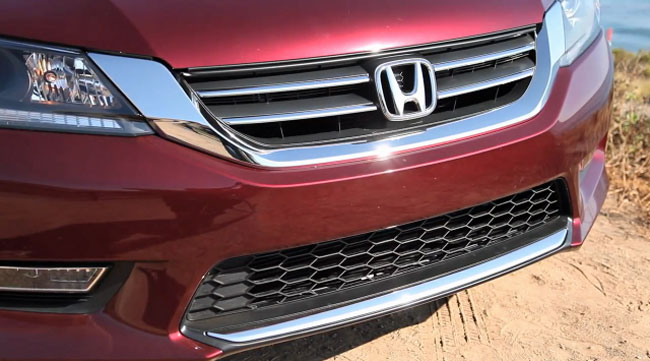 You have to love this cool chrome splitter down on the bottom. 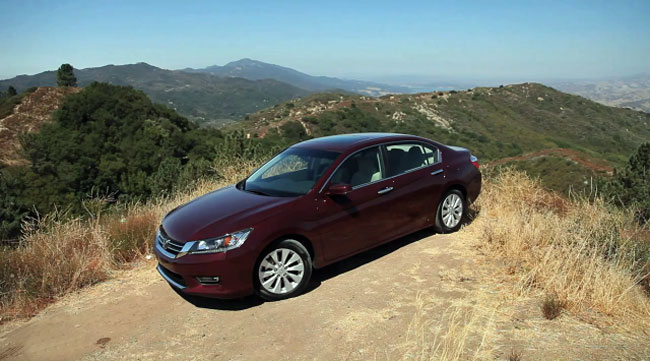 And helping the car look more purposeful and better proportioned, the 2013 Honda Accord is actually 3.6″ shorter in length overall and yet Honda insists that it’s kept interior volume the same as the older model. 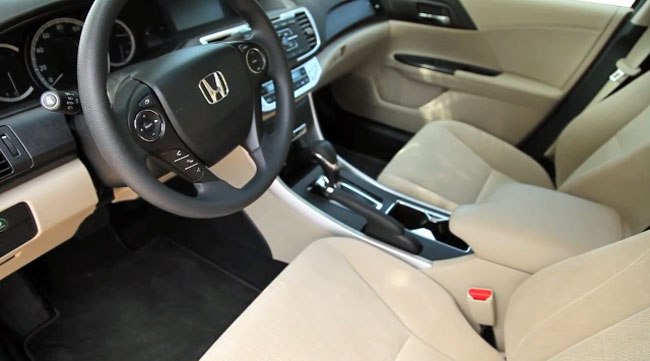 Inside, the interior is definitely familiar. While it’s not exactly dripping with design, for the most part all of the materials are first-rate. 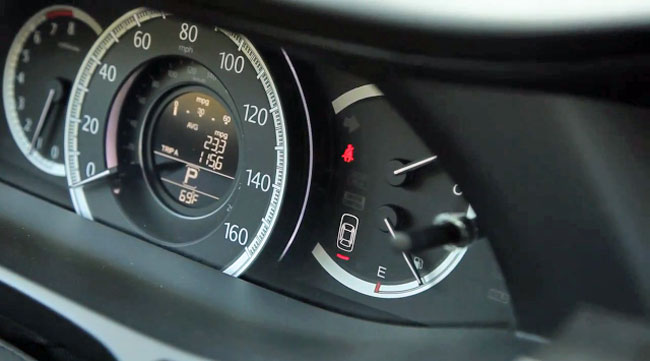 We really like the 3D center gauges, but if we have one complaint about this car, it’d have to be the seats. 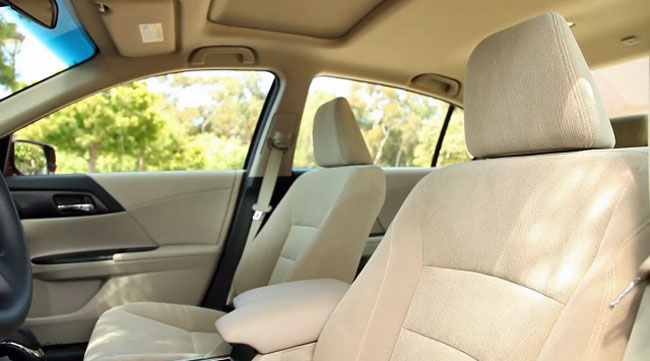 While they’re comfortable, the look and feel of the seats as well as the materials they’re made of are something you’d expect from a Honda Accord in the 90’s. But sit in any seat in the Accord and you can appreciate the reason for its outside design. It might not have one of those sleek designs with a really high belt line and tiny windows, but you can see out of it really well from any seat. 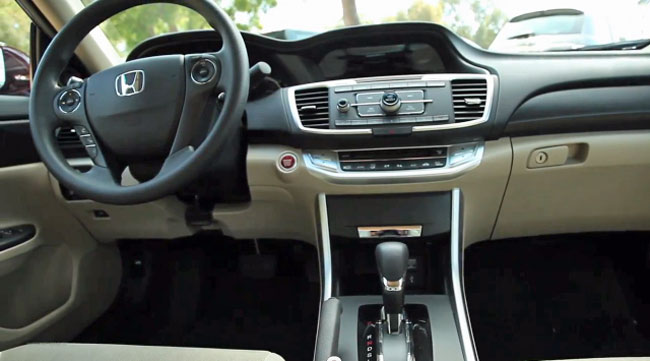 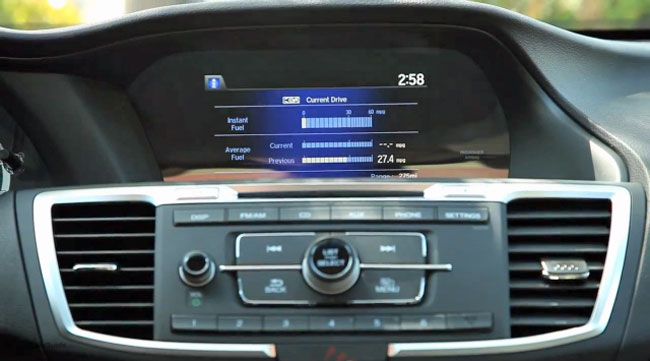 All models come standard with dual-zone climate control as well as an 8″ LCD screen up on the dash that includes the Honda i-MID system and backup camera. Along with that, all cars get a USB port and Honda’s ECON button which helps fuel economy by dulling the throttle response. 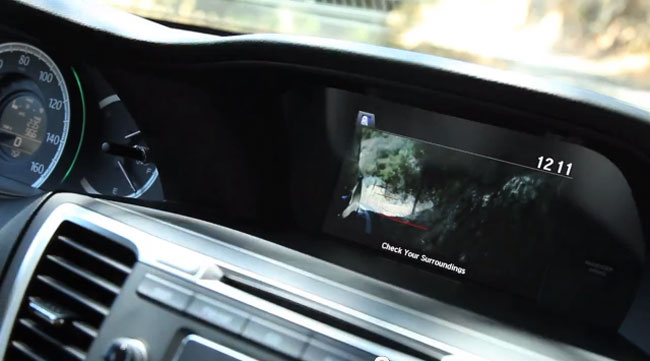 Step up to the popular EX trim level and you get a sunroof, keyless access with pushbutton ignition as well as Honda’s new Lanewatch System. Instead of just a blind spot warning system, it will actually use a camera and the LCD screen to display what it in your blind spot. 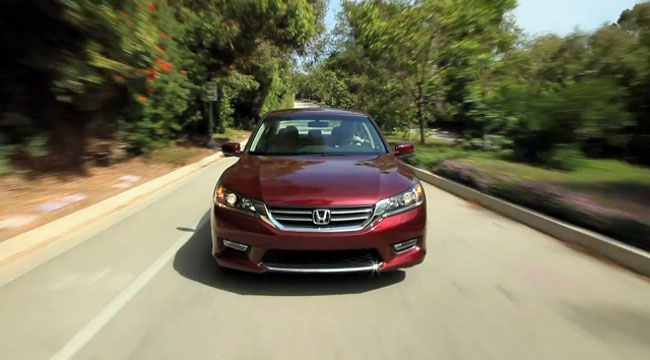 Drive the all-new 2013 Honda Accord and the first thing you’ll notice is the improved sound deadening. This car is nearly silent! And even more so if you opt for the V6 engine; at idle you literally can’t even tell it’s on. In many ways, you’ll feel like you’re driving a luxury car when behind the wheel of the new Accord, especially if you’re in one of the high-grade trim levels with the V6. But at the same time, it doesn’t feel like a big car. The new electric power steering system is light but reasonably responsive. Honda claims that they maximized the steering ratio, making it a little quicker but the change is so slight that the average driver can’t tell. 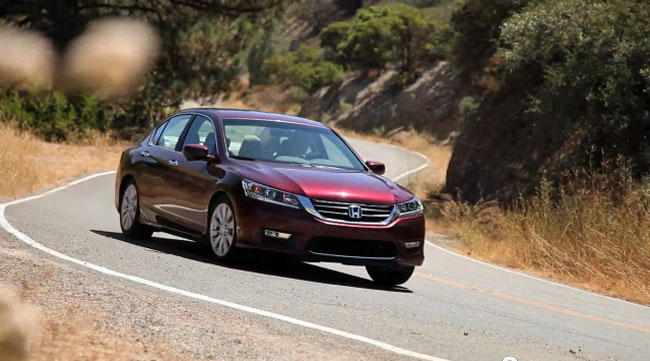 The new 4-cylinder engine is peppy enough and while Honda claims that it’s faster than any of its competitors, it’s probably such a slight margin that it wouldn’t be noticeable on a normal basis. As for the V6, when equipped with a manual transmission on the coupe, it’s an absolute riot! The big question for many will be the CVT transmission paired with the 4-cylinder engine. Obviously done for the sake of fuel efficiency, it does seem unlike Honda to go that direction with the Accord. However, we’re happy to report that the combination is quite good when throttle levels are sufficient! Otherwise, it can feel somewhat like the rubber band effect. That being said, the results speak for themselves. The Accord does achieve a real-world 30 MPG as promised!

Quieter and more refined, the 9th generation Honda Accord carries on hallmarks of the brand like interior space and value. The car does cost between $200 and $340 more than the outgoing model, meaning it starts at $21,680 or $22,480 if you want an automatic transmission. Truth be told, it’s hard not to be swayed by sleeker styling and an extra MPG on the highway when you consider the long-standing reputation Honda has for quality, durability and reliability. Package that with everything Honda offers in the new 2013 Accord and it never has been a question of why should you buy an Accord, but better yet, why shouldn’t you?

Be sure to watch the video version of this review!