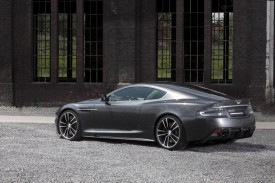 Aston Martin DBS is based on the DB9, sharing the same VH Platform, roof, sidescreens and wheelbase. It also sits lower, is wider and has more power.

Inside this Aston Martin was refreshed with Alcantara, carbon fiber inserts and metal accents.

Within the space of six months, edo competition, located in the Westphalian Ahlen, has transformed a 5 year old DB9 into an Aston Martin DBS. And that’s exactly what a Russian customer asked for: Turn a DB9 into a DBS.
This not so trivial conversion involved replacing steel body panels with carbon fiber pieces and increasing the engine output from 470 to a staggering 550 horsepower. That’s why it will now do 320 km/h (199 mph) when the old car topped out at 295 km/h (183 mph). Its new 20 inch wheels and wider body contribute to a more muscular appearance, and numerous aerodynamic parts, such as a carbon fiber front skirt as well as a carbon fiber rear diffuser, underline the car’s sporting credentials.

The custom interior presented a unique challenge: The dashboard, center console, headliner, door panels and seats were refinished with utmost precision. The choice of materials and colors was left to the customer, who, in this case, opted for an Alcantara/leather interior with carbon fiber inserts and metal accents.

An additional highlight is the high-end audio system that was installed in the car, promising pure auditory bliss. No corners were cut in trying to extract the best possible sound from the new high-end speakers. In order to be able to enjoy the new entertainment system, a new exhaust system featuring butterfly valves was fitted, allowing the driver to change the sound from ferocious to unobtrusive and quiet.
But that’s not the only function. This high-performance exhaust system which was specially developed for the DB9/DBS also helps the engine produce more power and torque. A programmable control unit monitors exhaust backpressure and opens 70 mm butterfly valves when the pressure exceeds a selected threshold. The exhaust is made from stainless steel and the chrome exhaust tips round off its classy appearance.

A new edo competition sport suspension system makes the revitalized DB9 more athletic. To accommodate different driving styles, the suspension is adjustable in ride height, stiffness, as well as compression and rebound damping. After the DB9 received a considerable boost in output and handling performance, there was one more area that needed to be addressed: safety. This is why edo competition developed a new braking system for the Aston. 405 mm rotors and 6 piston monobloc calipers act on the front wheels, while the rear axle is fitted with 380 mm rotors and 4 piston monobloc calipers. High-performance brake pads and braided stainless steel brake lines are used on all four corners.

This marked the end of the transformation and the work was completed. The DB9 had been turned into a DBS. Rather than just performing cosmetic changes, edo competition had also refined the mechanicals and customized the car according to the wishes of its owner.