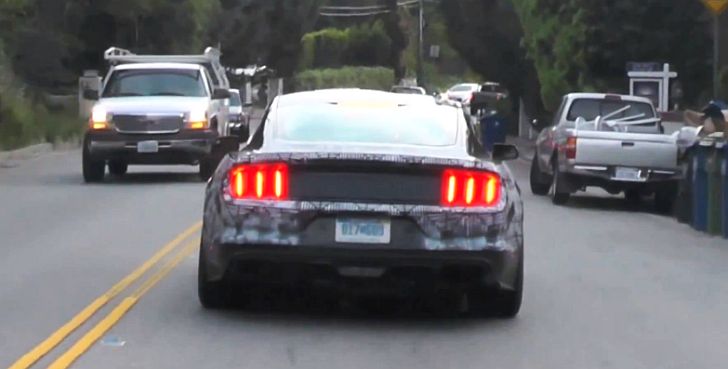 If you’re a huge fan of the Shelby GT500 and you were hoping Ford will carry the nameplate (and the performance) into the redesigned 2015 Mustang, then you must be somewhat disappointed. Although they haven’t confirmed or denied it, it’s already known that the Blue Oval manufacturer won’t offer a new GT500.

However, you shouldn’t be too unhappy because Ford has something else up it’s sleeve. As you might have already found out, the 2015 Mustang is supposed to (at least) match the 2014 Boss 302 in terms of performance, mostly because of its reduced weight, redesigned chassis, independent rear suspension and other techy, new features.

This means that the high-performance version intended to replace the GT500 – to be named GT350, according to a Ford’s body codes chart for the 2015 model year – will live up to expectations, although it won’t have as much power as the current almighty Shelby. There’s no official data about that, but rumor has it the GT350 will have at least 450 horsepower, which makes sense considering that the latest spyshots with the musclecar have revealed that the hood will be hiding a supercharger.

So when’s the 2015 Mustang GT350 coming? That’s a tricky one and we wish we’d knew more about it. We’re pretty much sure it will be on sale for the 2015 model year, but it won’t arrive in dealerships by the end of 2014. However, we wouldn’t be surprised to see it at the 2014 New York Auto Show two month from now, revealed just in time for the Mustang’s 50th Anniversary, which is scheduled on April 17.

Unfortunately, there’s more waiting involved. And no one likes that. But maybe the videos below will keep you busy for a while. They’re quite short, but it’s the best GT350-related stuff we have right now. Specifically, a prototype was filmed while passing through downtown Los Angeles, and according to the guy who posted the videos the vehicle “laps around LA and comes by Flower and Wilshire around 7 PM every night”. Enjoy them below and forget to come back for more updates on the 2015 Mustang GT350.

In case you’re not already familiar with the sixth-generation Mustang, Ford plans to roll out the global pony in the fourth quarter of the month with a choice of three engine. The entry-level 3.7-liter V6 with “at least 300 hp and 270 lb-ft of torque” will be kept as an US-exclusive engine, while a brand new 2.3-liter EcoBoost will mark the return of the four-cylinder to the Mustang lineup since 1993.

The new unit will deliver “more than 305 hp and 300 lb-ft” of torque and will be offered in any of the markets the 2015 Mustang is scheduled to hit. Finally, the range-topping 2015 Mustang will keep the iconic 5.0-liter Coyote V8 which Ford says it has been updated to produce “more than 420 hp and 390 pound feet”.

Don’t forget to check out our recent article about the 2016 Ford Mustang Mach 1!
2015 Mustang GT350 rendering at the top by Rampant @ Mustang6G forums.