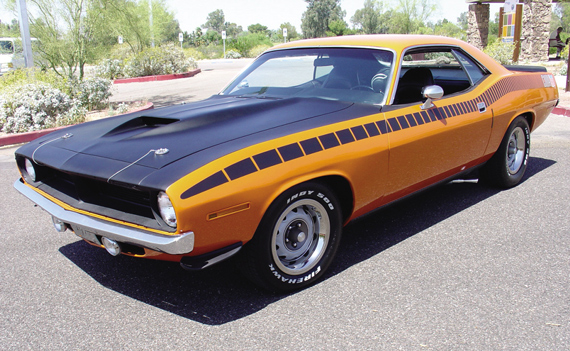 Here you’ll find history, pics and specs on one of the greatest muscle cars in American automotive history: the Plymouth Cuda! We include the 1970, 1971, 1972, and 1973 model years (1974 coming soon!) as well as a little background information on other Mopars like the Dodge Challenger, Charger and Dart. Please bookmark us and visit the site often for updates as we continue to add new content.

If you are an “I’ll-drive-my-muscle-car-everyday-and-die-with-a-smile-on-my-face” type of guy, you should probably check out the Plymouth ‘Cuda 340. Its small-block V-8 is a little more suitable for hops to the 7-11 than a 440 Wedge or a Hemi, but don’t get the idea that the 340 is wimpy. Nothing could ever be further from the truth.

Barracuda entered its third and final generation for the 1970 model year, when the distance between the front wheels was upped to comfortably swallow any power plant from a Slant-Six to a Hemi. The fastback coupe body style that originated with the Barracuda name was axed, but attractive two-door hardtop and convertible versions remained in the model lineup.

Motor Trend magazine ran a comparison test between ‘Cudas with all three available engines. In the 0-to-60 mph category, the 340-powered version needed 6.4 seconds compared to the 440’s 5.9 seconds and the Hemi’s 5.8 seconds. Its quarter-mile performance was 14.5 seconds (96 mph) compared to 14.4 seconds and 100 mph for the 440 version and 14 seconds and 102 mph for the Hemi ‘Cuda. The 440-powered test car had a four-speed manual gearbox, while the ‘Cuda 340 and the Hemi ‘Cuda had automatic transmissions.

For all-around use, the ‘Cuda 340 was really a quite nicely balanced package. After driving all three cars, Motor Trend’s A.B. Shuman admitted to his readers, “From the foregoing you may have detected a ‘slight’ preference for the 340 ‘Cuda. This was intentional. It was the best of the lot!” There are many Mopar maniacs who were glad they listened to A.B. and even more who wished they had!

“The ’71 Hemi ‘Cuda is pretty beyond comparison and potent beyond imagination,” according to Paul Zazarine, a name well known to muscle car lovers.  In Musclecar Review magazine, he wrote: “If you’re looking for the ultimate Mopar, look no further than the Hemi ‘Cuda.”

Drag racers like Sox & Martin and PeeWee Wallace were burning up the drag strips in Barracudas back in 1971 and also helping to generate interest in Plymouth’s “fish car.”  A lot of that interest went to non-Hemi-powered cars, however, as the $884 Hemi option was ordered for just 108 hardtops (60 with four-speed manual transmissions) and a mere seven convertibles.  Two of the ragtops also had the four-speed gearbox.

Seven other engines were offered for the 1971 Barracuda and a number of those mills fit into the muscle car category.  The three smallest engines did not fill the bill.  They included the 198-cid/125-hp slant six, the 225-cid/145-hp slant six, and the 318-cid 230-hp V-8.  These engines were aimed at the “Walter Mitty” buyers who wanted to experience the muscle car lifestyle without the ponies or price tag.

The ’71 Hemi engine featured a 10.2:1 compression ratio and a single four-barrel carburetor.  It came attached to either a four-speed manual gearbox or an automatic transmission.  The standard rear axle had a 3.23:1 ratio.  Sure-Grip-only options included 3.55:1, 3.54:1, and 4.10:1.  Plymouth’s nifty S15 heavy-duty suspension package was standard with Hemi ‘Cudas.

After model year ’71, Plymouth continued to offer Barracudas, but Hemi versions and convertibles didn’t make the cut after the season came to its end. Stay tuned for more information on the 1972, 1973, and 1974 Plymouth ‘Cuda at this website soon!

Some people confuse the term “muscle car” with “race car,” and they shouldn’t. Race cars have one purpose in lice and muscle cars have many. For many enthusiasts in the the ’60s, a muscle car took them to work all week, to the supermarket on Saturday, and to the drag strip on “Sunday…Sunday…Sunday!” on of the best of these multi-purpose muscle machines was the ‘Cuda 340.

“The ‘Cuda 340 is the kind of car a person could like,” said auto writer Steve Kelly in the January 1971 issue of Hot Rod magazine. “It runs low-14 without breathing hard, takes corners without yelling, and is big enough to be seen.” Kelly admitted that the ‘Cuda 340 was not the ultimate Trans-Am racer, but he also pointed out that it could beat a stock Camaro Z/28 or Mustang Boss 302 through the quarter-mile.

Standard equipment on the ‘Cuda included all Barracuda features plus a performance hood, chrome wheel lip and body-sill moldings, a color-keyed grille, a black-out-style rear deck panel, a heavy-duty suspension front and rear, heavy-duty brakes, ‘Cuda ornamentation and whitewall tires as a no-cost option. The 383-cid V-8 was again standard and the 340-cid four-barrel V-8 was a $44.35 option.

Production of ‘Cudas in general was very low this year. Plymouth made only 6,228 hardtops and 374 convertibles. It is known that a total of 153 cars had Hemis. Although we have never seen production breakouts for 340s, 383s, and 440s, with so many options available, the number made of each is probably fairly low, and since the 383-cid V-8 was bigger and less expensive, it’s likely that it drew the bulk of the orders.

Hot Rod magazine managed to turn in a best run of 14.18 seconds for the quarter-mile (100.33 mph) with its 1971 ‘Cuda 340 after emptying the trunk and removing the air cleaner element. In addition, it also proved to be a superior road car.