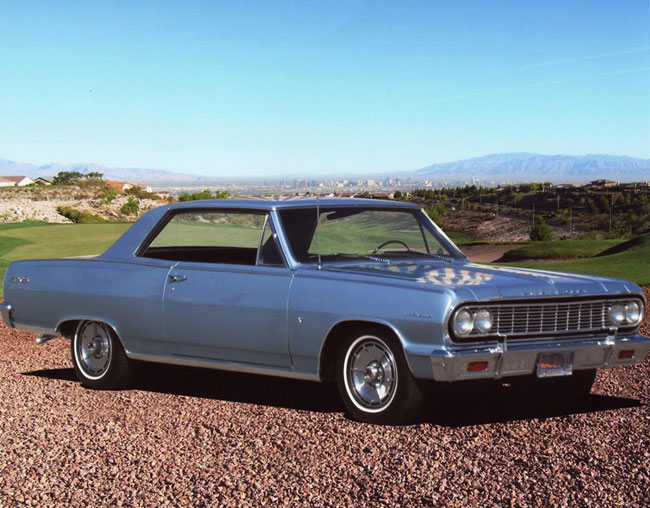 Life started out simple enough for the ’64 Chevy Chevelle. It was the lowest-priced of the four all-new A-body intermediates from General Motors that model year. the others were the Pontiac LeMans, the Olds Cutlass and the Buick Skylark.

Inside and outside of the Chevrolet offices, comparisons were readily made to the late and already lamented 1955-1957 Chevrolets. The 115-inch wheelbase of the Chevelle’s frame was the same as the 1955 model’s. Other dimensions, except height, were close.

A variety of models was offered with the top-of-the-line Malibu two-door hardtop and convertible abailavbe with the $170 Super Sport option. This package included bucket seats, a console and appropriate SS badges.

Initial power-plant offerings included the standard 194-cid six, an optional 230-cid six and a pair of old reliable 283-cid V-8s. In V-8 models, the 195-hp tow-barrel version was standard. An L77 220-hp version with a four-barrel carburetor was $54 extra.

Nostalgia for the earlier models was fine, but when Pontiac shoved its big-389-cid/325-hp V-8 into GTO-optioned Tempests, the pressure was on to keep up. Oldsmobile answered quickly with a 330-cid/310-hp “police” option for its F-85, which soon evolved into the 4-4-2.

GM had just been through one of its soul-cleansing anti-performance purges in 1963 and Chevrolet, at first, was turned down when it requested that the 327-cid small-block V-8 be approved for use in the Chevelle. GM brass relented and, in quick order, the 250-hp L30 and 300-hp L74 327 V-8s were added to the Chevelle optiond list at midyear. The former was only $95 over the base 283-cid V-8 and the latter added another $138. Chevy literature even advertised the 365-hp L76 out of the Corvette and some back-door drag racing specials most likely got them.

It seemed that the Chevelle lived right, from its introduction through its value today as a collectible car. A Malibu two-door hardtop listed for $2,484 in base, V-8 form and the convertible at $2,587. Today, show condition convertibles sell for over 10 times their original price and the hardtops only slightly less. Models with four-speed manual gearboxes and SS trim do even better.